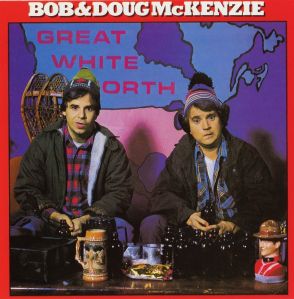 In late 1959, the Second City Theatre opened in Chicago (a city in the United States), showcasing improvisational comedy. A Second City theatre was opened in Toronto in 1973. Three years later, the Toronto troupe, which consisted of John Candy, Joe Flaherty, Eugene Levy, Andrea Martin, Catherine O’Hara, Harold Ramis, and Dave Thomas, began a television show called SCTV (Second City Television). The basic premise of the show was that SCTV was an independent television station in the fictional city of Melonville. SCTV created its own funny commercials, soaps, game shows, news reports, and movie shorts, many of which were parodies of real shows. They created their own characters but also did impersonations of famous actors.

SCTV ran until 1984 and served as the primary launching pad for some of the most famous Canadian comedic actors. Tony Rosato, Robin Duke, Rick Moranis, and Martin Short joined the show in later seasons.

The McKenzie Brothers were featured in ads, made cameo appearances, and starred in a feature film called Strange Brew. A comedy album was released in 1981—The Great White North. The album spawned two hit singles: “The Twelve Days of Christmas” and “Take Off”, the latter featuring Rush vocalist Geddy Lee. The Great White North entered the RPM charts at #3 on December 12th 1981 and hit #1 the following week where it remained until January 23rd, 1982. It was certified triple Platinum in Canada and sold a million copies in North America.

Transcription of the lead up conversation to the song “Take Off”:

Bob: Okay, be real nice to him, eh.
Doug: Okay, eh.
Bob: Okay. This is, uh, the hit single section of our alb’m.
Doug: Good day.
Bob: Good day. Uh, Geddy Lee is here from Rush. Hi, Geddy. I’m Bob McKenzie; this is my brother Doug.
Doug: How’s it goin’, Geddy?
Geddy: Oh, it’s goin’ pretty good. Good day, eh.
Bob & Doug: Good day.
Bob: Uh, thanks for comin’ down to do our hit.
Geddy: Well, it’s my pleasure, eh.
Bob: D-did our lawyer call ya?
Geddy: Ya, I’m a – yuh know – ten bucks is ten bucks.
Bob: Uh, we were, uh, I hope you don’t mind but there’s a photographer that’s gonna be takin’ pictures of us together to prove that you were here doin’, uh, the record.
Doug: Yeah, in case people don’t believe us—
Geddy: How come he’s not wearin’ a toque?
Doug: Oh, he’s not from The Great White North, eh.
Bob: Okay, so if you’d like to, uh, put on, uh, a toque and some headphones, we can, uh, do the hit single now.
Geddy: Sure. I—that’d be great.
Bob: Do you have the lyrics sheet?
Geddy: Oh ya. I memorized them.
Bob: Oh, great! Beauty!
Doug: How did, how did you do that so fast?
Geddy: I’m a professional, eh.
Bob & Doug: [Snickering]