1990’s biggest song in Canada was Phil Collins’ “I Wish It Would Rain Down”. As far as Canadian hits go, Laurence Jalbert’s “Tomber” was the biggest Franco hit and Alias’ “More Than Words Can Say” the most successful Anglo hit. Below is a list of all Canadian Franco hits that finished in CKOI’s year-end Top 50. All Canadian hits that made the RPM Top 100 of the year are listed as well as all that peaked in the Top 40 of the weekly charts. Bear in mind, that this is a picture of cross-Canada success. Songs may have charted much higher or lower in various cities as radio stations usually give local artists more support. Below the lists, check out some cool trivia regarding the year’s hits. 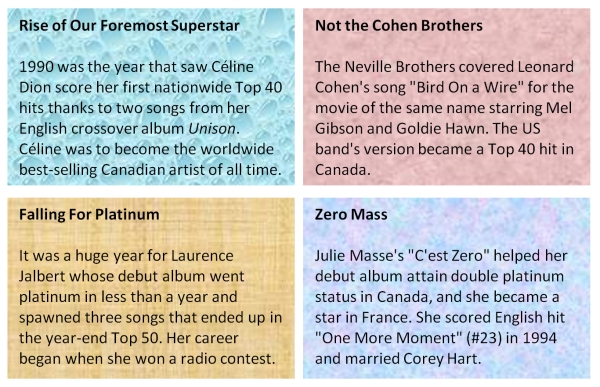