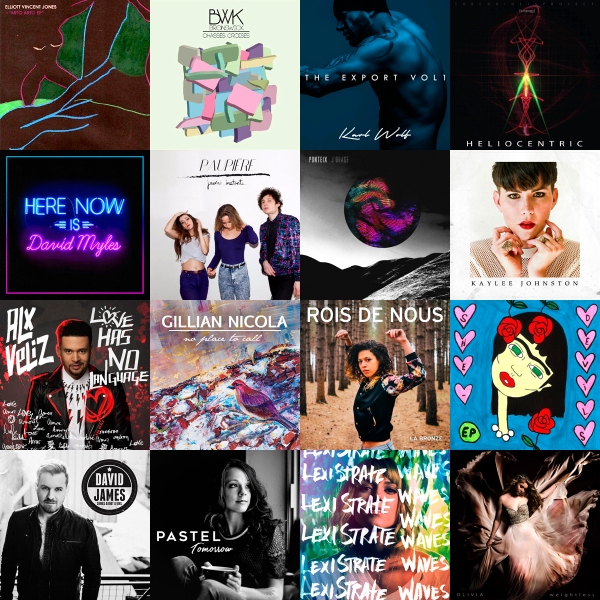 We have listened to 71 extended play records from Canadian artists released from January 1 to June 30, 2016, and settled upon our 16 picks for the best. We add capsule reviews of each of them below sorted alphabetically by title. Before we do this, we would like to list some honourable mentions: Help Me Help You by Kieran Mercer, Nord-est by Rosie Valland, Hold Onto the Light by Jessica Mitchell, EP4 by Wolf Parade, L’amour violet by Michèle O, and Live au Treatment by Salomé Leclerc. We consider an EP as having at least 3 original tracks with a run time of less than 25 minutes.

Arto Arto by Elliott Vincent Jones does an excellent job at providing well-written songs with an 80s synthpop vibe reminiscent of Blancmange or The Human League.

Chassés-croisés by Bronswick fires up the synths in this delightful excursion into alternative pop territory. Catherine’s silky vocals are a delight and Bertrand takes some turns at the mic as well. The ride is a relaxed one with lots of electronic glitter to keep things interesting.

The Export, Vol 1 by Karl Wolf has the Montreal multiplatinum R&B specialist shine brightly from his new home at a Victoria, BC record label presenting this sumptuous mini album, more than worth checking out.

Heliocentric by The Coriolis Project adds some ambient Vancouverite atmosphere in a cinematic ride through beauteous anthems dedicated to the four directions of the compass.

Jeunes instants by Paupière has the trio offer some fine synthpop through expert record label Lisbon Lux and received a very positive feature in Exclaim magazine.

J’orage by Ponteix sheds some shimmer onto Saskatoon, a dazzling array of bilingual alternative soundscapes of electronica tinged with funky grooves.

Love Has No Language by Alx Veliz placed the Toronto singer on the Hot 100 and gave him an appearance at this year’s MMVAs. The pop EP comes in two language versions: English (red) and Spanish (turquoise).

No Place to Call by Gillian Nicola adds a very beautiful voice to pleasant singer-songwriter breezes emerging from Hamilton.

She-Devils by She-Devils created much buzz with opener “Come” a very catchy surf anthem, but the other two tracks are equally invigorating, meandering through groove and dream.

Songs About a Girl by David James is a brilliant Winnipeg country record that attracted a Canadian Radio Music Award nomination!

Tomorrow by Pastel gives folk pop the treatment it deserves from a singer who appeared on The Voice and with songs that will immediately engage you.

Waves by Lexi Strate is easily the year’s best EP to date with amazing pop jewels and some rich, alternative sprinkles all made very professionally in Alberta.

Weightless by Olivia contains wonderful, mature or AC pop songs from the Vernon, BC native sporting a voice as sweet as Alessia Cara’s.